Fun-Gal Snacks founders Marilyn Yang and Michael Casali are passionate about health but were disappointed in the healthier-for-you chip options like seaweed and kale. For them, a healthy alternative to potatoes and corn packed with nutrition, flavorful, and satisfying would come from a somewhat unlikely source—mushrooms.

Fried Shitake caps are the base of new snack Popadelics, launching in three flavors: Rad Rosemary and Salt, Trippin' Truffle Parm, and Twisted Thai Chili. The mushrooms are vacuum-fried, using less oil and retaining more nutrients than deep-frying. Popadelics snacks are also vegan contains 8g of protein and 16g of fiber in every bag.

Though Popadelics get made from tasty mushrooms, they aren’t the kind you buy from a guy in the Coachella parking lot, and the new snack won’t make the walls dance. However, the branding and packaging take a dose of magic mushrooms as inspiration. Designed with agency Freshmade, the branding is a trippy throwback to the 70s, using bright gradients, wavy organic shapes, and funky typography. Enlarged photography featuring a well-seasoned mushroom cap dominates the front of the Popadelics bag. 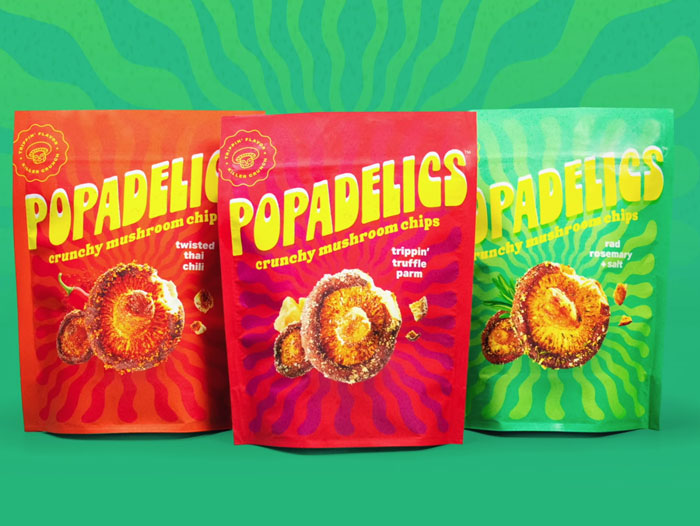 In a press release, Marilyn Yang, co-founder and CEO of Fun-Gal Snacks, said, “We're super psyched to turn everyone on—even mushroom doubters—to the superpowers of shiitake mushrooms. Popadelics are only the beginning. We're on a mission to create innovative snacks that harness the benefits of mushrooms and other underloved veggies.”

Pre-sales for Popadelics will start February 22 via IndieGoGo.